Mezzanine Connectors (Board to Board)

3.Enter "account center"->"My inquiries" and check the status of your inquiries

* Please fill in the cell phone number correctly to make sure that you can receive the tracking info in time. 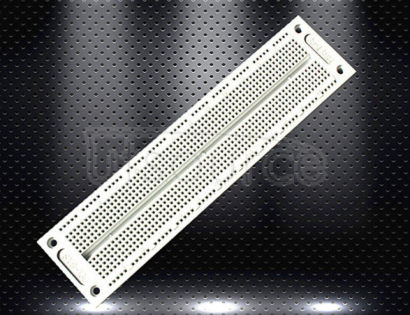 2. Utsource certified original parts can be returned and refunded unconditionally within 90 days.

Universal circuit experiment board, use very convenient, service life in more than 100000 times, the product adopts engineering plastics and high elastic sheet metal processing and become, after some colleges students to use the common reaction is convenient to use, long life, greatly convenient for some small and medium-sized circuit experiment and production. It has been popularized in nearly 100 schools. Common electronic components can be inserted directly! Greatly reduce the number of wires, and clean and beautiful! Internal high elastic stainless steel sheet, guaranteed to use tens of thousands of times! There will never be any bad contact!

Breadboard is an important tool for the test circuit in the laboratory, and it is one of the bases to improve the experiment efficiency and reduce the chance of experiment failure. The first line of the two narrow strips is usually connected to the ground wire. The second line is connected to the power supply. Due to the integrated piece of power supply in the above commonly, grounded in the following, so layout will help to integrate the power of the foot and the second line above narrow strip is linked together, narrow ground under the feet and the first line of the is linked together, reduce the number of wire length and jumper. The middle width bar is used to connect the circuit. Since the groove is not connected up and down, the integrated block is generally inserted into the groove.
Product Reviews
Submit

ALL IN PERFECT ORDER

Returns are normally accepted when completed within 60 days from the date of the parcel delivered.

Return Freight charges must be prepaid; we will not accept COD shipments.

All UTSOURCE purchases have a 60 days money back return policy, plus a 90 days UTSOURCE warranty against any manufacturing defects.This warranty shall not apply to any item where defects have been caused by improper customer assembly, failure by customer to follow instructions, product modification, negligent or improper operation.

Use the APP to scan the QR code on the left, directly enter the product page to order .

You cna instal the APP from Apple Store or Google Play Store.

Seller Sold by third-party seller and fulfilled by UTSOURCE

Express:(FEDEX, UPS, DHL, TNT)Free shipping on first 0.5kg for orders over 200$,Overweight will be charged separately

Discontinued products: Provide electronic components that have been discontinued

When will the order be shipped?

Why can't my credit card pay?

how much is it?

When will the order be shipped?

What if there is a problem with my page display?

Your dedicated customer service, providing you the best service at any time.

Rich inventory, you can find all the electronic components of the world's major brands

Utsource is a global electronic components online service platform, where many outstanding suppliers are gathered. Utsource provide the FBU (Fulfillment by Utsource) service, it is an integrated service for SME(Small and medium enterprises) users. Features: high efficiency, high speed, safety and convenience.

Stop production experts, we can provide a large number of electronic components that have been stopped production and are difficult to find, to facilitate the maintenance company